About our Jean Monnet Project:

At the beginning of 2019, EU-Latin America and Caribbean (LAC) relations, although cordial as always, seemed to have reached a stalemate. By the beginning of 2020, the prospects for a relaunch of EU-LAC relations were surprisingly promising. At the EU level, the 2019 new strategy for Latin America and the Caribbean announced by the European Commission, the agreement for a trade deal with MERCOSUR, and the newly appointed European Commission all seemed to indicate an upgrade of Latin America in the EU’s external agenda. In 2019, Germany too announced a new policy towards Latin America and the Caribbean, which made LAC a strategic ally for Berlin. Yet, the breakout of the COVID-19 pandemic in 2020 has changed the global scenario and the prospects for EU-LAC relations.

Our Jean Monnet project explores “The Reconfiguration of the EU presence in Latin America (EUinLAC)” by analysing these developments and their consequences. We will particularly address two crucial aspects of EU-LAC relations : The role and foreign policy of key actors (EU, Spain, Germany, Italy, UK, Brazil) and topical issues on the bi-continental agenda (environment, migration, citizen participation, paradiplomacy, tech and science diplomacy, and many others).

The Jean Monnet Activities were launched by the European Commission to promote excellence in research and teaching on the European Union worldwide. Jean Monnet Actions aim to build bridges between academics, researchers and EU policymakers with an emphasis on the study of and research on EU integration and in understanding Europe’s place in a globalised world. Within this framework, EUinLAC is a Jean Monnet Research Project awarded to the university of Erlangen-Nuremberg under the Erasmus+ Programme of the European Union.

It responds to three key needs:

The project brings together an interdisciplinary team of young and established scholars. The research team is composed of academics based in Germany, Spain, Italy, United Kingdom, Chile, Ecuador, and Brazil.

To see their bio please check out the Team-Site. 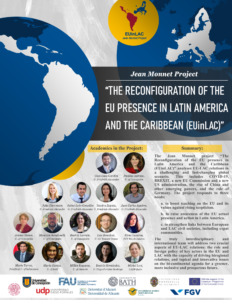 Watch the presentation of our Research Project in Spanish!